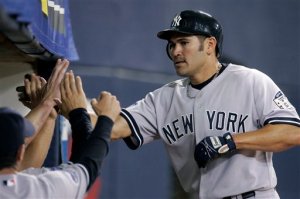 How hard must it be for A-Rod to restrain himself from jumping Giambi’s tail? I mean if the Giambino is walking round the clubhouse with a golden thong AND Ron Jeremy stache, A-Rod must be spending half of his paycheck on Vaseline. Over/Under on days before embarrassing clubhouse masturbation revealed: 3. This actually may be troublesome for the Jays’ chances the next three days. With all that pent-up sexual frustration, A-Rod may rake this series. He went 3-4 with a jack last nite, the same nite Giambi’s smuttiness peaked. Some one should do a study on A-Rod’s statistical swings and his homosexual urges.